Joy on Fire is John Paul Carillo, Anna Meadors, Chris Olsen, and Dan Gutstein. The band formed in Baltimore 12 years ago and is currently headquartered in Trenton, N.J.  Featured last year on NPR’s All Songs Considered, Joy on Fire is scheduled to play a Tiny Desk Concert as soon as conditions permit. The band recently released the Thunderdome EP, which features “Uh Huh,” and is available on vinyl only at the Joy on Fire website. The protest song “Uh Huh” was written specifically to eviscerate the plague of guns and gun violence, and this video, made by Fulbright Fellows Gabriela Bulisova and Mark Isaac, adds its own eerie and deeply righteous narrative. We are proud to say that it was just made an Official Selection of the Prisma Rome Independent Film Awards (July 2020).

An animation that addresses an active shooter event that took place in Nicelle’s classroom. The school is comprised of children of color and unfortunately the situation was not handled very delicately.

Through their generosity, Gays Against Guns provided artifacts from protests to be on display at the gallery at Chashama, including protest signs, stickers, Human Beings, and digital media including photography and documentary footage of their organization.

Gays Against Guns is an inclusive direct action group of LGBTQ people and their allies committed to nonviolently breaking the gun industry’s chain of death—investors, manufacturers, the NRA and politicians who block safer gun laws.

They work to ensure safety for all individuals, particularly vulnerable communities such as people of color, women, people who struggle with mental health issues, LGBTQ people and religious minorities. GAG condemns white supremacy, all instances of excessive force by police, and police militarization. 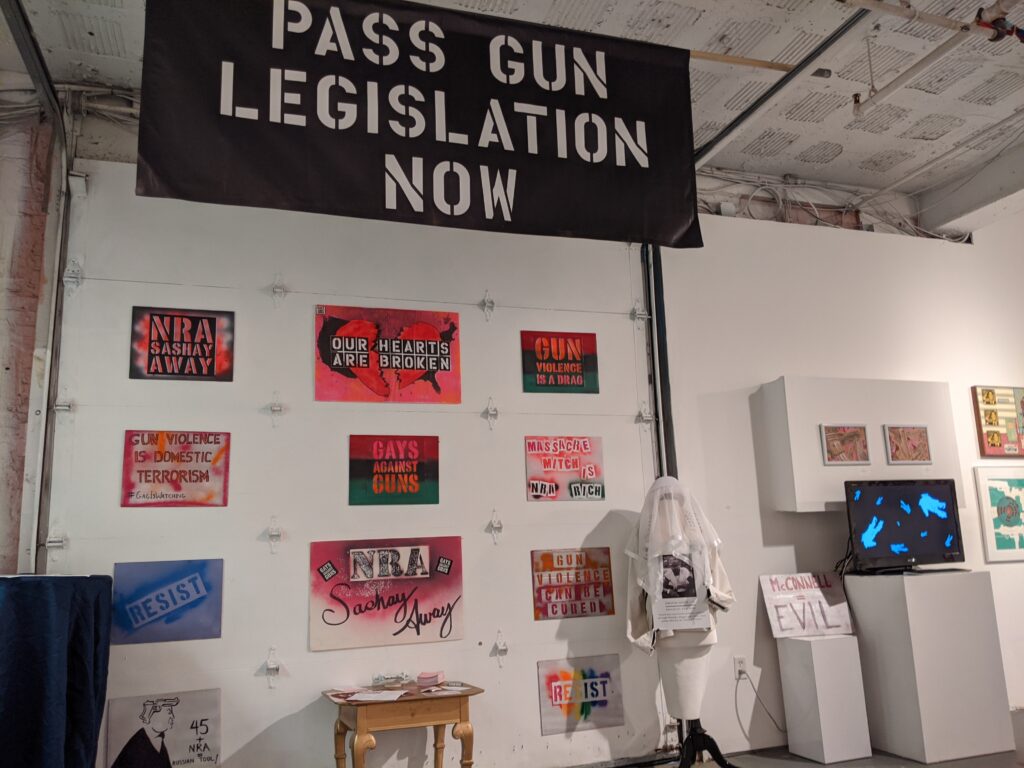 Installation Shot at Chashama Matawan includes protes signs, banners, and a Human Being holding up a placard of a victim of gun violence.

Gays Against Guns were formed in the aftermath of the Pulse nightclub massacre in 2016 where 49 mostly black and brown queer kids were gunned down on the dance floor. GAG’s Human Beings were created by performance artist Tigger Ferguson in response and marched down 5th Avenue for New York City Pride two weeks later. Each Human Being represents a life lost to gun violence. Initially it was the 49 lives lost at Pulse, but the practice quickly expanded to encompass all victims of gun violence, particularly those most impacted – women, people of color, the LGBTQ+ community, those suffering from mental health issues, and religious minorities.

The Human Beings remain silent and veiled, dressed in white, a color of mourning in many cultures and a deliberate change from the traditional black. They carry photos of the dead, and hold space for those we have lost.

This video is a loop designed for museum and gallery exhibition by filmmaker Paul Rowley. Music is by Oberman Knocks.